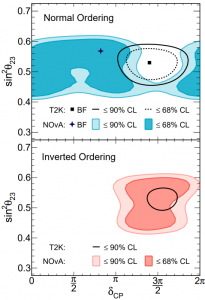 An Improved Measurement of Neutrino Oscillation Parameters by the NOvA Experiment

We present new νμ→νe, νμ→νμ, νμ→νe, and νμ→νμ oscillation measurements by the NOvA experiment, with a 50% increase in neutrino-mode beam exposure over the previously reported results. The additional data, combined with previously published neutrino and antineutrino data, are all analyzed using improved techniques and simulations. A joint fit to the νe, νμ, νe, and νμ candidate samples within the 3-flavor neutrino oscillation framework continues to yield a best-fit point in the normal mass ordering and the upper octant of the θ23 mixing angle, with Δm232 = (2.41±0.07)×10-3 eV2 and sin2θ23=0.57+0.03−0.04. The data disfavor combinations of oscillation parameters that give rise to a large asymmetry in the rates of νe and νe appearance. This includes values of the CP-violating phase in the vicinity of δCP=π/2 which are excluded by 3σ for the inverted mass ordering, and values around δCP=3π/2 in the normal ordering which are disfavored at 2σ confidence. 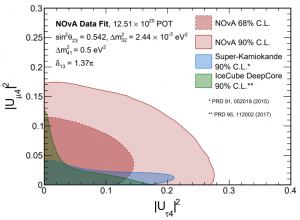 This Letter reports results from the first long-baseline search for sterile antineutrinos mixing in an accelerator-based antineutrino-dominated beam. The rate of neutral-current interactions in the two NOvA detectors, at distances of 1 km and 810 km from the beam source, is analyzed using an exposure of 12.51×1020 protons-on-target from the NuMI beam at Fermilab running in antineutrino mode. A total of 121 of neutral-current candidates are observed at the Far Detector, compared to a prediction of 122±11(stat.)±15(syst.) assuming mixing between three active flavors. No evidence for νμ→νs oscillation is observed. Interpreting this result within a 3+1 model, constraints are placed on the mixing angles θ24< 25∘ and θ34< 32∘ at the 90% C.L. for 0.05 eV2 ≤ Δm241 ≤ 0.5 eV2, the range of mass splittings that produces no significant oscillations at the Near Detector. These are the first 3+1 confidence limits set using long-baseline accelerator antineutrinos. 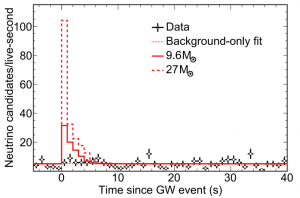 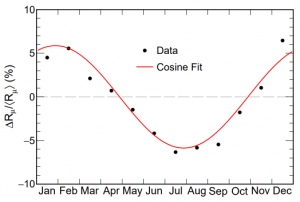 We report the rate of cosmic ray air showers with multiplicities exceeding 15 muon tracks recorded in the NOvA Far Detector between May 2016 and May 2018. The detector is located on the surface under an overburden of 3.6 meters water equivalent. We observe a seasonal dependence in the rate of multiple-muon showers, which varies in magnitude with multiplicity and zenith angle. During this period, the effective atmospheric temperature and surface pressure ranged between 210 K and 230 K and 940 mbar and 990 mbar, respectively; the shower rates are anticorrelated with the variation in the effective temperature. The variations are about 30% larger for the highest multiplicities than the lowest multiplicities and 20% larger for showers near the horizon than vertical showers. 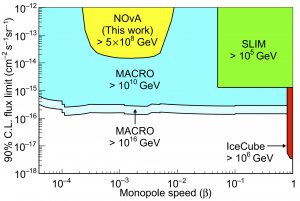 We report a search for a magnetic monopole component of the cosmic-ray flux in a 95-day exposure of the NOvA experiment’s Far Detector, a 14 kt segmented liquid scintillator detector designed primarily to observe GeV-scale electron neutrinos. No events consistent with monopoles were observed, setting an upper limit on the flux of
2×10−14 cm−2 s−1 sr−1 at 90% C.L. for monopole speed 6×10−4 < β < 5×10−3 and mass greater than 5×108 GeV. Because of NOvA’s small overburden of 3 meters-water equivalent, this constraint covers a previously unexplored low-mass region. Using the NOvA neutrino detectors, a broad search has been performed for any signal coincident with 28 gravitational wave events detected by the LIGO/Virgo Collaboration between September 2015 and July 2019. For all of these events, NOvA is sensitive to possible arrival of neutrinos and cosmic rays of GeV and higher energies. For five (seven) events in the NOvA Far (Near) Detector, timely public alerts from the LIGO/Virgo Collaboration allowed recording of MeV-scale events. No signal candidates were found.

The NOvA long-baseline neutrino experiment uses a pair of large, segmented, liquid-scintillator calorimeters to study neutrino oscillations, using GeV-scale neutrinos from the Fermilab NuMI beam. These detectors are also sensitive to the flux of neutrinos which are emitted during a core-collapse supernova through inverse beta decay interactions on carbon at energies of O(10 MeV). This signature provides a means to study the dominant mode of energy release for a core-collapse supernova occurring in our galaxy. We describe the data-driven software trigger system developed and employed by the NOvA experiment to identify and record neutrino data from nearby galactic supernovae. This technique has been used by NOvA to self-trigger on potential core-collapse supernovae in our galaxy, with an estimated sensitivity reaching out to 10 kpc distance while achieving a detection efficiency of 23% to 49% for supernovae from progenitor stars with masses of 9.6 M⊙ to 27 M⊙, respectively. The NOvA experiment has made a 4.4σ-significant observation of νe appearance in a 2 GeV νμ beam at a distance of 810 km. Using 12.33×1020 protons on target delivered to the Fermilab NuMI neutrino beamline, the experiment recorded 27 νμ→νe candidates with a background of 10.3 and 102 νμ→νμ candidates. This new antineutrino data is combined with neutrino data to measure the oscillation parameters |Δm232|=2.48+0.11−0.06×10−3 eV2/c4, sin2θ23=0.56+0.04−0.03 in the normal neutrino mass hierarchy and upper octant and excludes most values near δCP=π/2 for the inverted mass hierarchy by more than 3σ. The data favor the normal neutrino mass hierarchy by 1.9σ and θ23 values in the upper octant by 1.6σ. Particle detectors record the interactions of subatomic particles and their passage through matter. The identification of these particles is necessary for in-depth physics analysis. While particles can be identified by their individual behavior as they travel through matter, the full context of the interaction in which they are produced can aid the classification task substantially. We have developed the first convolutional neural network for particle identification which uses context information. This is also the first implementation of a four-tower siamese-type architecture both for separation of independent inputs and inclusion of context information. The network classifies clusters of energy deposits from the NOvA neutrino detectors as electrons, muons, photons, pions, and protons with an overall efficiency and purity of 83.3% and 83.5%, respectively. We show that providing the network with context information improves performance by comparing our results with a network trained without context information. The cross section of neutrino-induced neutral-current coherent π0 production on a carbon-dominated target is measured in the NOvA near detector. This measurement uses a narrow-band neutrino beam with the average neutrino energy of 2.7 GeV, which is of interest to the ongoing and future long-baseline neutrino oscillation experiments. The measured, flux-averaged cross section is σ = 14.0 ± 0.9 (stat.) ± 2.1 (syst.)×10−40 cm2/nucleus, consistent with model prediction. This result is the most precise measurement of neutral-current coherent π0 production in the few-GeV neutrino energy region. 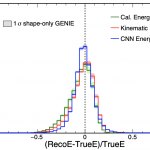 In neutrino experiments, neutrino energy reconstruction is crucial because neutrino oscillations and differential cross-sections are functions of neutrino energy. It is also challenging due to the complexity in the detector response and kinematics of final state particles. We propose a regression convolutional neural network (CNN) based method to reconstruct electron neutrino energy and electron energy in the NOvA neutrino experiment. We demonstrate that with raw detector pixel inputs, a regression CNN can reconstruct event energy even with complicated final states involving lepton and hadrons. Compared with kinematics-based energy reconstruction, this method achieves a significantly better energy resolution. The reconstructed to true energy ratio shows comparable or less dependence on true energy, hadronic energy fractions, and interaction modes. The regression CNN also shows smaller systematic uncertainties from the simulation of neutrino interactions. The proposed energy estimator provides improvements of 16% and 12% in RMS for νe CC and electron, respectively. This method can also be extended to solve other regression problems in High Energy Physics, taking over kinematics-based reconstruction tasks. We report results from the first search for sterile neutrinos mixing with active neutrinos through a reduction in the rate of neutral-current interactions over a baseline of 810 km between the NOvA detectors. Analyzing a 14-kton detector equivalent exposure of 6.05×1020 protons-on-target in the NuMI beam at Fermilab, we observe 95 neutral-current candidates at the Far Detector compared with 83.5 ± 9.7(stat.) ± 9.4(syst.) events predicted assuming mixing only occurs between active neutrino species. No evidence for νμ→ νs transitions is found. Interpreting these results within a 3+1 model, we place constraints on the mixing angles θ24 < 20.8∘ and θ34 < 31.2∘ at the 90% C.L. for 0.05 eV2 ≤ Δm241 ≤ 0.5 eV2, the range of mass splittings that produce no significant oscillations over the Near Detector baseline. Results are reported from an improved measurement of νμ→ νe transitions by the NOvA experiment. Using an exposure equivalent to 6.05×1020 protons-on-target 33 νe candidates were observed with a background of 8.2 ± 0.8 (syst.). Combined with the latest NOvA νμ disappearance data and external constraints from reactor experiments on sin22θ13, the hypothesis of inverted mass hierarchy with θ23 in the lower octant is disfavored at greater than 93% C.L. for all values of δCP. Measurement of the neutrino mixing angle θ23 in NOvA We report results from the first search for νμ→νe transitions by the NOvA experiment. In an exposure equivalent to 2.74×1020 protons-on-target in the upgraded NuMI beam at Fermilab, we observe 6 events in the Far Detector, compared to a background expectation of 0.99±0.11 (syst.) events based on the Near Detector measurement. A secondary analysis observes 11 events with a background of 1.07±0.14 (syst.). The 3.3σ excess of events observed in the primary analysis disfavors 0.1π < δCP < 0.5π in the inverted mass hierarchy at the 90% C.L. Convolutional neural networks (CNNs) have been widely applied in the computer vision community to solve complex problems in image recognition and analysis. We describe an application of the CNN technology to the problem of identifying particle interactions in sampling calorimeters used commonly in high energy physics and high energy neutrino physics in particular. Following a discussion of the core concepts of CNNs and recent innovations in CNN architectures related to the field of deep learning, we outline a specific application to the NOvA neutrino detector. This algorithm, CVN (Convolutional Visual Network) identifies neutrino interactions based on their topology without the need for detailed reconstruction and outperforms algorithms currently in use by the NOvA collaboration. This paper reports the first measurement using the NOvA detectors of νμ disappearance in a νμ beam. The analysis uses a 14 kton-equivalent exposure of 2.74×1020 protons-on-target from the Fermilab NuMI beam. Assuming the normal neutrino mass hierarchy, we measure Δm232=(2.52+0.20-0.18)×10−3eV2 and sin2θ23 in the range 0.38-0.65, both at the 68% confidence level, with two statistically-degenerate best fit points at sin2θ23= 0.43 and 0.60. Results for the inverted mass hierarchy are also presented. PVC Extrusion Development and Production for the NOvA Neutrino Experiment

We have produced large and highly-reflective open-cell PVC extrusions for the NOvA neutrino oscillation experiment. The extrusions were sealed, instrumented, assembled into self-supporting detector blocks, and filled with liquid scintillator. Each Far Detector block stands 15.7 m high, is 15.7 m wide and 2.1 m thick. More than 22,000 extrusions were produced with high dimensional tolerance and robust mechanical strength. This paper provides an overview of the NOvA Far Detector, describes the preparation of the custom PVC powder, and the making of the extrusions. Quality control was a key element in the production and is described in detail. We describe the Library Event Matching classification algorithm implemented for use in the NOvA νμ→νe oscillation measurement. Library Event Matching, developed in a different form by the earlier MINOS experiment, is a powerful approach in which input trial events are compared to a large library of simulated events to find those that best match the input event. A key feature of the algorithm is that the comparisons are based on all the information available in the event, as opposed to higher-level derived quantities. The final event classifier is formed by examining the details of the best-matched library events. We discuss the concept, definition, optimization, and broader applications of the algorithm as implemented here. Library Event Matching is well-suited to the monolithic, segmented detectors of NOvA and thus provides a powerful technique for event discrimination.